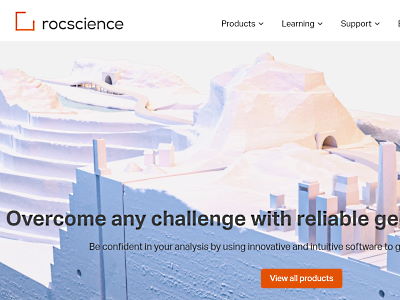 CPillar is a quick, interactive, and easy-to-use analysis tool for evaluating the stability of surface or underground crown pillars, and laminated roof beds.

EX3 is an engineering analysis program for underground excavations in rock.

RocData is a versatile toolkit for the analysis of rock and soil strength data, and the determination of strength envelopes and other physical parameters.

RocFall is a statistical analysis program designed to assist with assessment of slopes at risk for rockfalls.

RocSupport is a fast and easy to use program for estimating the deformation of circular tunnels in weak rock and visualizing the tunnel interaction with various support systems.

RSPile is a program for the calculation of the axial load capacity of driven piles and the analysis of piles under lateral loading.

Settle3D is a 3-dimensional program for the analysis of vertical consolidation and settlement under foundations, embankments and surface loads.

Swedge is a quick, interactive and simple to use analysis tool for evaluating the geometry and stability of surface wedges in rock slopes.

Hello. do you have a version that works on mac os?...

I have same problem...

I install settl3D 4 software on my pc but when I run this program, it respond me sentinel key not found (H0007). can you help pls...