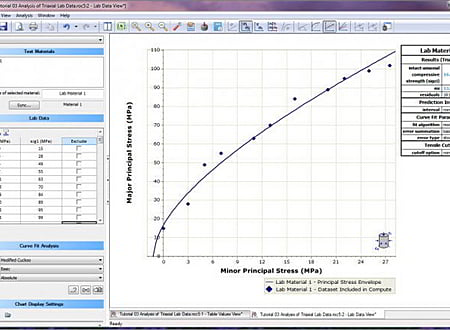 RocData is a versatile toolkit for the analysis of rock and soil strength data, and the determination of strength envelopes and other physical parameters. RocData now includes RocProp, a database of intact rock properties which runs as a standalone application.

RocData is an interactive toolkit for the analysis of rock and soil strength data.   Strength envelopes and other parameters can be determined from curve-fitting of test data.

RocData can be used to determine the parameters of linear and non-linear strength envelopes for rock and soil, based on the analysis of triaxial or direct shear strength data. RocData utilizes four of the most widely used strength models in geotechnical engineering - Generalized Hoek-Brown, Mohr-Coulomb, Barton-Bandis and Power Curve.

Failure envelopes are plotted in both shear-normal and principal stress space. Shear-normal stress envelopes generated by RocData can be applied to problems such as limit equilibrium analysis of slope stability, while the principal stress envelopes can be used for modeling the behaviour of underground excavations. RocData is a highly interactive program that allows users to easily test different strength parameters and observe how they impact a failure envelope, giving users a better understanding of material strength.

The material strength properties determined by RocData can be used as input for numerical analysis programs such as Phase2 (finite element stress analysis and support design for excavations) and Slide (limit equilibrium slope stability analysis).

RocData now includes RocProp , a database of intact rock properties which runs as a standalone application. RocProp contains over 700 test records from credible sources, including compressive strength, tensile strength, elastic properties, Hoek parameters and velocity parameters. The database can be searched and filtered in various ways, and allows users to add their own data to the database.

Design and Analysis for Rock Socket under Axial Loading

PileROC is a program that predicts the load settlement curve at the pile head for the piles socketed into rock based on three commonly-used methods.

The program Redi Rock wall is used to design and check a retaining walls made from blocks produced by Redi-Rock, Inc (USA).

Submit a review about RocData software with your social media profile

RocData has been rated 5.0 out of 5 points. A total of 4 votes cast and 0 users reviewed the software.

Designing an MSE wall requires consideration of the geometric configuration and reinforcement requirement to ensure external and internal stability.