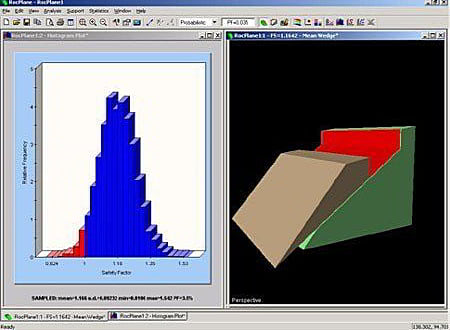 RocPlane is an interactive software tool for performing planar rock slope stability analysis and design. RocPlane makes it easy to quickly create planar models, visualize them in both 2D and 3D, and evaluate analysis results. RocPlane contains many helpful features that allow users to rapidly build, modify and run models.

RocPlane also includes functionalities for easily analyzing results, generating figures and charts, and producing convenient summaries of models and results. The report generation features of RocPlane are especially useful to engineers when writing reports with high-quality, and professional-looking drawings and diagrams. They help slope designers to readily communicate findings to people with varying slope engineering knowledge.

RocData is a versatile toolkit for the analysis of rock and soil strength data, and the determination of strength envelopes and other physical parameters.

Swedge is a quick, interactive and simple to use analysis tool for evaluating the geometry and stability of surface wedges in rock slopes.

RocPlane has been rated 3.7 out of 5 points. A total of 3 votes cast and 0 users reviewed the software.

PileSuite is a powerful suite of software products for deep foundation analysis and design for both onshore and offshore projects.

DartisLog is a bore log software that will help users to create soil borehole logs specially adjusted for the Geotechnical Engineer.