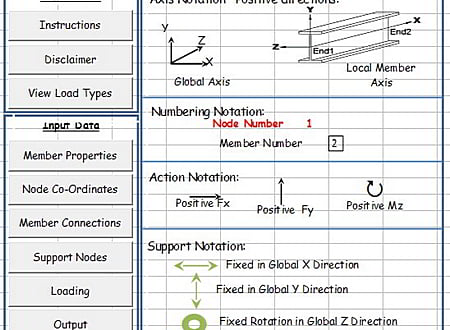 Limits have been applied to the number of nodes (21), number of members (20), and number of loads in one load case (40). Either metric units or US Customary units can be used.

FRAME is a spreadsheet program written in MS-Excel for the purpose of plane frame analysis of portal and gable rigid plane frames subjected to various types of loading.

Analysis for Static Loads and Settlement at Supports

EngiLab Frame. 2D is an easy-to-use yet powerful engineering tool for the structural analysis of plane (2D) frames for Windows, using a 3-DOFs (Degrees of Freedom) per node approach.

Plane Frame Analysis for Static Loads has been rated 2.9 out of 5 points. A total of 14 votes cast and 0 users reviewed the software.