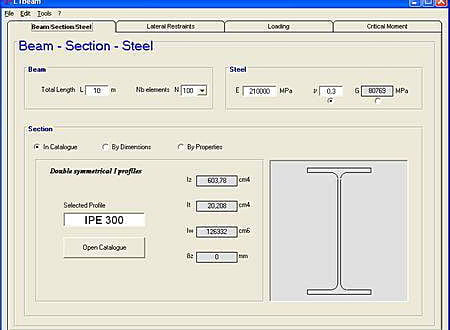 LTBeam is a software which deals with the elastic "Lateral Torsional Buckling of Beams" under bending action about their major axis.

LTBeam is a software to be used for the Design of Steel Structures. It has been developed by CTICM (Centre Technique Industriel de la Construction Metallique - France) in the frame of an european research project partially funded by the European Community for Steel and Coal (ECSC Project No 7210-PR183 : "Lateral torsional buckling of steel and composite beams" - 1999-2002).

The lateral torsional buckling phenomenon (LTB) appears when the bending action reaches a critical level. It generates suddenly and simultaneously a lateral bending deformation and a longitudinal torsional deformation along the unrestrained length of beam.

LTBeam applies to straight single- or multi-span beams, under simple bending about their strong axis, with doubly - or mono-symmetrical cross-sections about this plane of bending. Lateral restraints against LTB may be discrete or continuous, full or elastic, and may concern the lateral displacement, the torsional rotation, the lateral flexural rotation and the warping. As the loading, lateral restraints may be applied at a distance above or beneath the shear centre of the cross-sections.

LTBeam is rather designed to deal with steel beams, but others materials can be used, on condition that appropriate properties be input.

ArcelorMittal Construction Phase ACP for composite solutions to check the LTB behaviour of composite and/or partially encased beams during erection.

Buckling Analysis for Plates with or Without Stiffeners

The RF-/PLATE-BUCKLING is available as an add‑on module for RFEM/RSTAB or as a separate stand‑alone program.

The A3C software allows the designer to perform the detailed verification of a single steel member or a composite steel-concrete column according to the rules of the Eurocodes.

Accumulation of Water in Buildings Roofs

ACUDO is an Excel application which examines the effect of water accumulation phenomenon in a building roofs.

Submit a review about LTBeam software with your social media profile

LTBeam has been rated 2.8 out of 5 points. A total of 74 votes cast and 1 users reviewed the software.

BEAMANAL is a MS-Excel spreadsheet workbook for the analysis of single-span beams (simple, propped, fixed, or cantilever) and continuous beams of up to 5 spans.