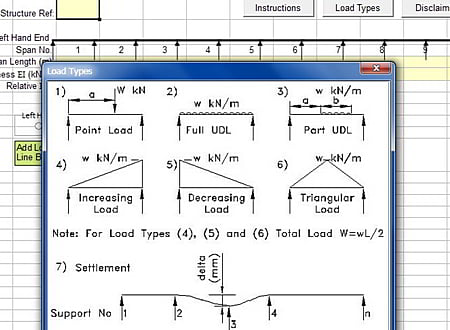 This Proforma calculates bending moments and shear forces for loads on a single span or continuous multi-span beam using the moment distribution method. Static point or distributed loads may be analysed. Settlement at the supports may also be analysed.

* Line Beam Analysis for Static Loads download link provides freeware version of the software for Metric and US.

Bending Moments, Axial and Shears Forces in a Plane Frame

Influence Line diagrams for bending moments at critical sections in a single or multi-span continuous beam.

This spreadsheet calculates the secondary effects (bending moments and shear forces) produced by the releasing moment from differential temperature effects on a continuous beam.

Line Beam Analysis for Static Loads has been rated 2.9 out of 5 points. A total of 8 votes cast and 1 users reviewed the software.