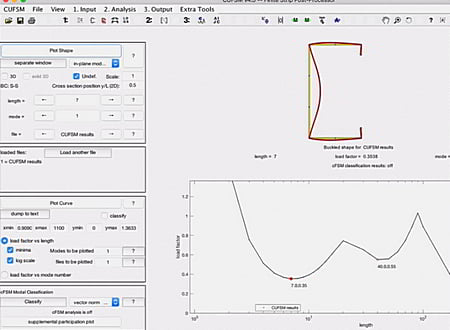 CUFSM is the Constrained and Unconstrained Finite Strip Method and was originally developed by Ben Schafer in 1997. For an arbitrary thin-walled cross-section CUFSM can efficiently provided all cross-section and member elastic buckling modes and loads for any applied end action (compression, bending, warping, etc.).

CUFSM includes tools for generalized beam-column loading and analysis. A number of supplementary tools have been added to CUFSM including development of plastic surfaces for cross-sections under arbitrary load, independent global buckling analysis with classical beam formula, and an interface to generate ABAQUS input files with cross-section imperfections based on CUFSM buckling modes.

CUFSM is maintained by the Thin-walled Structure Group of Prof. Ben Schafer. CUFSM is open source and free, as a result, comprehensive support is not provided.

Properties and Stresses of Thin-Walled Cross-Sections

SHAPE‑THIN determines section properties of any thin-walled cross‑section and calculates the stresses. In addition, you can perform plastic design.

Elastic and Plastic Resistance of Open and Thin Walled Sections

Cross Section Analysis and Design can handle structural cross sections that are built up of one or more geometric entities and can be drawn directly using the versatile featured user interface.

ThinWallSections is a software tool for analysis of multi-cell thin-wall sections. Runs Stand Alone and also Integrates tightly with Excel and Matlab.

Submit a review about CUFSM software with your social media profile

CUFSM has been rated 5.0 out of 5 points. A total of 2 votes cast and 0 users reviewed the software.