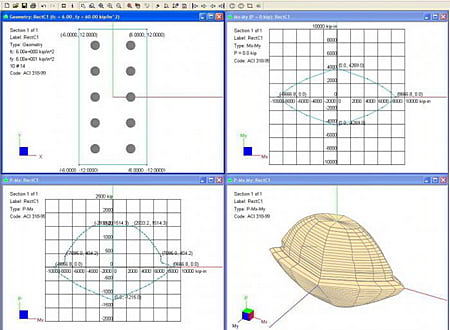 cColumn (formerly known as RcSections) is a powerful 32-bit Windows program designed specifically for structural engineers to perform axial-flexural analysis and design of concrete columns (as well as beams and shear walls) according to ACI 318-11/08/05/02 and ACI 318-99. It analyzes the uniaxial- or biaxial-bending capacity of multiple sections of various regular shapes (rectangular, round, Tee, I, L) and generic shapes (with openings) simultaneously in a fast and user-friendly manner. Multiple load sets may be input and checked against section capacities. It features tabulated strain-P-M at every user defined neutral axis step, 2D P-Mx and P-My interaction diagrams, and incredible 3D P-Mx-My interaction surface built upon OpenGL(R)!

Submit a review about cColumns software with your social media profile

cColumns has been rated 4.0 out of 5 points. A total of 4 votes cast and 0 users reviewed the software.