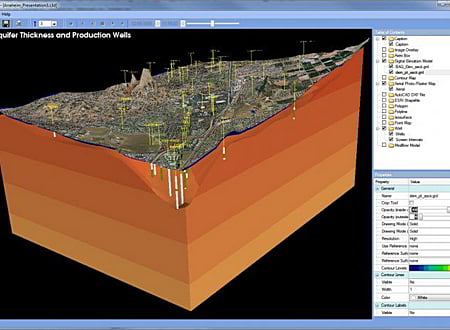 Seer3D is an application for the visualization of field measurement data and the groundwater model results. It includes powerful tools for displaying vector and raster maps, presenting wells, boreholes, lithological, and geophysical data. Showcase your work by merging maps, field data and model results into stunning beautiful 3D scenes! Use the intuitive display control tools to emphasize displayed objects by adjusting their transparency and display types between mesh and solid, cropping objects with on-screen crop tools, and adding annotation, logo, and legend. Create animation videos of plume development, water level changes, flow vector field, and flow paths based on measurement data and model results. Advanced View feature enables you to store arbitrary view points and navigate between them. Present your models with eye-popping 3D stereoscoping display using Quad buffered stereo technology and deliver your Seer3D models with the free Seer3D viewer to your clients for great impression.

The main features of Seer3D are outlined below:

Scattered datasets in the form of (x, y, z, value, time) can be used by Seer3D to generate images and videos. You can import data from files or from Microsoft Excel, Access, or SQL database through the built-in Open Database Connectivity (ODBC) interface. The imported data can be represented in the following forms:

Seer3D supports the USGS groundwater flow model MODFLOW, the transport models MT3DMS and SEAWAT, and a number of reactive transport models such as MT3D99, PHT3D, and RT3D. Seer3D can be used with most popular MODFLOW Graphical user interface applications, such as Processing Modflow, as long as they generate standard MODFLOW input datasets. The major features of the model support are outlined below:

Software to digitize data from graphs for Engineering design calculations and analysis.

Submit a review about Seer3D software with your social media profile

No one has rated Seer3D yet. Be the first to rate this product.