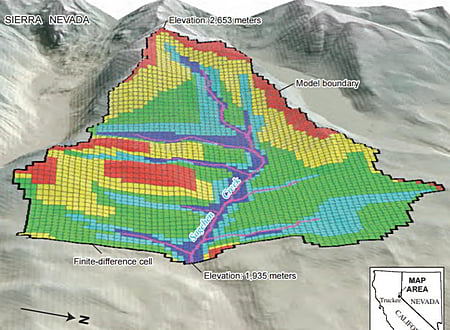 GSFLOW is a coupled Groundwater and Surface-water FLOW model based on the integration of the USGS Precipitation-Runoff Modeling System (PRMS-V) and the USGS Modular Groundwater Flow Model (MODFLOW-2005 and MODFLOW-NWT). GSFLOW was developed to simulate coupled groundwater/surface-water flow in one or more watersheds by simultaneously simulating flow across the land surface, within subsurface saturated and unsaturated materials, and within streams and lakes. Climate data consisting of measured or estimated precipitation, air temperature, and solar radiation, as well as groundwater stresses (such as withdrawals) and boundary conditions are the driving factors for a GSFLOW simulation.

GSFLOW operates on a daily time step. In addition to the MODFLOW variable-length stress period used to specify changes in stress or boundary conditions, GSFLOW uses internal daily stress periods for adding recharge to the water table and calculating flows to streams and lakes. Specified stream inflow over boundaries, internal stream-diversion flow rates, and groundwater-pumping flow rates can be specified using time-series input files that allow these stresses to vary during each time step.

* GSFLOW download link provides freeware version of the software for Windows and Linux.

Seer3D is an application for the visualization of field measurement data and the groundwater model results. It includes powerful tools for displaying vector and raster maps, presenting wells, boreholes, lithological, and geophysical data.

Distributed in over 60 countries & on the market for over 20 years, 12d Model is a proven world leader in civil engineering, water engineering & land surveying software.

Submit a review about GSFLOW software with your social media profile

No one has rated GSFLOW yet. Be the first to rate this product.