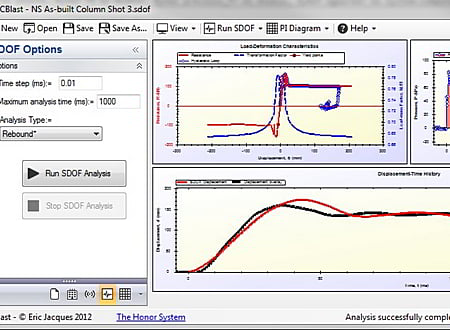 RCBlast was developed to conduct dynamic inelastic response history analysis of reinforced concrete elements subjected to blast-induced shock waves. A brief summary of the main features of the program are list below:

Dynamic SDOF analysis : RCBlast generates SDOF displacement time-histories by direct numerical integration of the dynamic equation of motion. The user has the ability to input custom load deformation functions, or utilize those computed within the structural analysis module. There are no limitations on the user-defined applied pressure-time history, Pr(t), and resistance curves. The program can handle both inbound and rebound displacements and can consider hysteretic behaviour to determine post-peak member response.

Blast load calculation : Blast loads can be input as a series of pressure-time data points defined by the user. The user may also specify the TNT equivalent explosive mass and stand-off distance and let RCBlast compute blast-pressure distribution automatically. Alternatively, the peak pressure and duration can be specified for use with a triangular blast load approximation.

Built-in structural analysis module : RCBlast has the built-in capability to generate resistance functions for one-way reinforced concrete members. The program incorporates some advanced structural analysis phenomenon not considered by other tools, such as:

PI diagrams : Pressure-impulse diagrams can be generated for any resistance function, however simple or complex. The program assumes a triangular forcing function with peak applied pressure and a linearly decrease load-time function. The tool can consider both positive phase only, and positive and negative phase on the PI diagram.

User friendly GUI : A graphical user interface (GUI) was developed to stream-line the analysis process. All parameters used in the solution of the dynamic equation of motion may be modified by the user within the GUI. Results are plotted on the screen, and the software has the capability to overlay plots of experimental results and theoretical predictions to facilitate data analysis. Program outputs are also made readily available for spreadsheet manipulations.

MOVLOADS is a spreadsheet program written in MS-Excel for the purpose of analysis of simple-span members subjected to from one up to eight moving wheel loads with up to seven wheel spacings.

Design of Concrete members per the latest IBC, ACI 318 specifications

ASDIP Concrete is a suite of modules specifically dedicated to the design of concrete members such as beams, columns and walls, based on the latest ACI 318 specifications.

Steel-Beam is a user-friendly robust program that allows the combined stress evaluation of steel beams and steel columns under combined axial and flexural loads.

RCBlast has been rated 4.0 out of 5 points. A total of 4 votes cast and 0 users reviewed the software.

Spreadsheet solver for concrete creep and shrinkage according to Eurocode No 2.