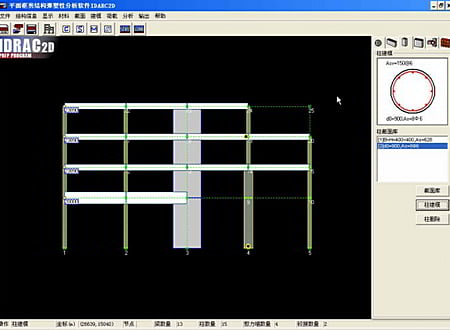 A Computer Program for Seismic Inelastic Structural Analysis. Developed at the State University of New York at Buffalo.

IDARC (2D) was created as a platform for nonlinear structural analysis in which various aspects of concrete, steel and other materials behavior can be modeled, tested and improved after. Software development and enhancements have been mainly to link experimental research and analytical developments. IDARC (2D) was introduced in 1987 as a two-dimensional analysis program to examine the non-linear response of multistory reinforced concrete buildings. The original program released included the following structural element types:

SeismoBuild is an innovative Finite Elements package for the seismic assessment and strengthening of reinforced concrete framed structures that is targeted to the design office.

IDARC 2D has been rated 3.8 out of 5 points. A total of 16 votes cast and 1 users reviewed the software.

SeismoSignal constitutes an easy and efficient way to process strong-motion data, featuring a user-friendly visual interface and being capable of deriving a number of strong-motion parameters often required by engineer seismologists and earthquake enginee

SeismoStruct is a Finite Element package capable of predicting the large displacement behaviour of space frames under static or dynamic loading, taking into account both geometric nonlinearities and material inelasticity.

SeismoSelect is an easy and efficient way to search, select, scale and download ground motion data from different strong motion databases that are available on-line.

Verification of INERD constructive system in steel that can be applied to reinforce concrete frame structure.