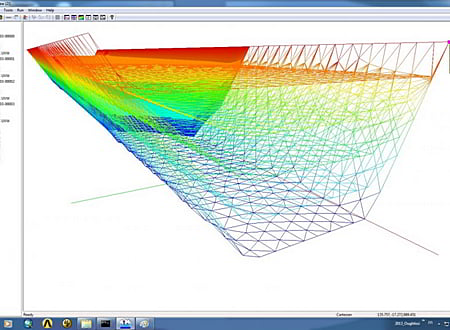 TELEMAC-MASCARET is a set of computational fluid dynamics modules dedicated to free surface flows and groundwater flows. Having been used in the context of many studies throughout the world, it has become one of the major standards in its field.

TELEMAC-2D : It 2D hydrodynamics module, TELEMAC-2D, solves the so-called shallow water equations, also known as the Saint Venant equations. TELEMAC-2D solves the Saint-Venant equations using the finite-element or finite-volume method and a computation mesh of triangular elements. It can perform simulations in transient and permanent conditions.

TELEMAC-3D : It 3D hydrodynamics module, TELEMAC-3D, uses the same horizontally unstructured mesh as TELEMAC-2D but solves the Navier-Stokes equations, whether in hydrostatic or non-hydrostatic mode so allowing shorter waves than those in a shallow water context (where wavelengths are required to be at least twenty times the water depth). The wave formulation for the updating of the free surface is used for efficiency. The 3D mesh is developed as a series of meshed surfaces between the bed and the free surface. Flexibility in the placement of these planes permits the use of a sigma grid (each plane at a given proportion of the spacing between bed and surface) or a number of other strategies for intermediate surface location. One useful example is to include some planes which are at a fixed distance below the water surface, or above the bed. In the presence of a near-surface thermocline or halocline this is advantageous in so far as mixing water between the near-surface planes, where the greatest density gradients are located, can be avoided. When drying occurs the water depth falls to zero exactly and the planes collapse to a zero inter-layer spacing.

ARTEMIS : ARTEMIS is a scientific software dedicated to the simulation of wave propagation towards the coast or into harbours, over a geographical domain of about few square km. The domain may be larger for simulation of long waves or resonance. The frequency dependence and directional spreading of the wave energy is taken into account by ARTEMIS. The computation retrieves the main wave characteristics over the computational domain: significant wave height, wave incidence, orbital velocities, breaking rate, ...

TOMAWAC : TOMAWAC is used to model wave propagation in coastal areas. By means of a finite-element type method, it solves a simplified equation for the spectro-angular density of wave action. This is done for steady-state conditions (i.e. with a fixed depth of water throughout the simulation).

SISYPHE : SISYPHE is the state of the art sediment transport and bed evolution module of the TELEMAC-MASCARET modelling system. SISYPHE can be used to model complex morphodynamics processes in diverse environments, such as coastal, rivers, lakes and estuaries, for different flow rates, sediment size classes and sediment transport modes.

Elastic and Plastic Resistance of Open and Thin Walled Sections

This is an application for calculating critical depth in open channels flow.

CADRE Flow is developed using the basic principles of finite element method as applied to the hydraulics flow field.

Open Telemac-Mascaret has been rated 5.0 out of 5 points. A total of 1 votes cast and 0 users reviewed the software.