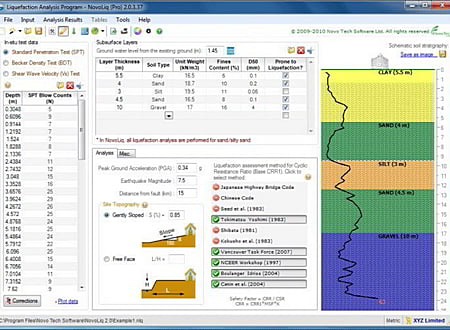 NovoLiq supports the following field tests for liquefaction triggering (full description of theory is included in our users manual):

Soil resistance (CRR) is calculated based on:

NovoLAB is the most comprehensive geotechnical software for lab data management and borehole log drafting.

LateralK is a simple software for calculating lateral earth pressure coefficients and forces behind retaining walls in static and earthquake condition based on Rankine/ Coulumb formulas and also Mononobe/ Okabe methods.

Geotechnical engineers can use this software for day-to-day analysis and calculations.

Submit a review about NovoLiq software with your social media profile

NovoLiq has been rated 4.7 out of 5 points. A total of 9 votes cast and 0 users reviewed the software.

SeismoSignal constitutes an easy and efficient way to process strong-motion data, featuring a user-friendly visual interface and being capable of deriving a number of strong-motion parameters often required by engineer seismologists and earthquake enginee

SeismoSelect is an easy and efficient way to search, select, scale and download ground motion data from different strong motion databases that are available on-line.

Verification of INERD constructive system in steel that can be applied to reinforce concrete frame structure.