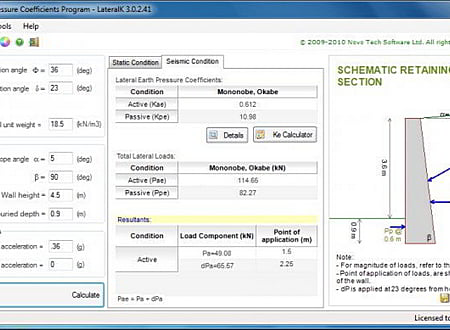 LateralK is a simple software for calculating lateral earth pressure coefficients and forces behind retaining walls in static and earthquake condition based on Rankine/ Coulumb formulas and also Mononobe/ Okabe methods. User manual (Help) is available for software.

The following features are incorporated into LateralK program:

Lateral Pressure on the Retaining Wall Due to Vertical Surcharge

This spreadsheet computes lateral pressure against retaining wall due to vertical surcharge loads.

This robust software is designed for soil liquefaction analysis during earthquake and supports multi-layer as well as single layer stratigraphy.

Geotechnical engineers can use this software for day-to-day analysis and calculations.

Submit a review about LateralK software with your social media profile

LateralK has been rated 5.0 out of 5 points. A total of 4 votes cast and 0 users reviewed the software.