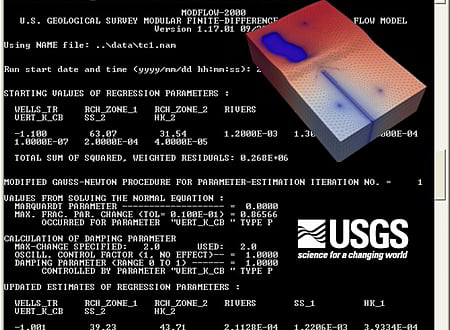 MODFLOW is the USGS's modular hydrologic model. MODFLOW is considered an international standard for simulating and predicting groundwater conditions and groundwater/surface-water interactions. MODFLOW 6 is presently the core MODFLOW version distributed by the USGS. The previous core version, MODFLOW-2005, is actively maintained and supported as well.

MODFLOW-2005 (Harbaugh, 2005) simulates steady and nonsteady flow in an irregularly shaped flow system in which aquifer layers can be confined, unconfined, or a combination of confined and unconfined. Flow from external stresses, such as flow to wells, areal recharge, evapotranspiration, flow to drains, and flow through river beds, can be simulated. Hydraulic conductivities or transmissivities for any layer may differ spatially and be anisotropic (restricted to having the principal directions aligned with the grid axes), and the storage coefficient may be heterogeneous. Specified head and specified flux boundaries can be simulated as can a head dependent flux across the model's outer boundary that allows water to be supplied to a boundary block in the modeled area at a rate proportional to the current head difference between a "source" of water outside the modeled area and the boundary block.

MODFLOW 6 is an object-oriented program and framework developed to provide a platform for supporting multiple models and multiple types of models within the same simulation. This version of MODFLOW is labeled with a "6" because it is the sixth core version of MODFLOW to be released by the USGS (previous core versions were released in 1984, 1988, 1996, 2000, and 2005). In the new design, any number of models can be included in a simulation. These models can be independent of one another with no interaction, they can exchange information with one another, or they can be tightly coupled at the matrix level by adding them to the same numerical solution. Transfer of information between models is isolated to exchange objects, which allow models to be developed and used independently of one another. Within this new framework, a regional-scale groundwater model may be coupled with multiple local-scale groundwater models. Or, a surface-water flow model could be coupled to multiple groundwater flow models. The framework naturally allows for future extensions to include the simulation of solute transport.

An Unstructured Grid Version of MODFLOW

Calculate Bar Lengths For Reinforcement Scheduled In Accordance With Bs 8666:2005

Calculates bar lengths for standard bar shapes and produces summaries of lengths and weights for bar types and diameters.

No one has rated MODFLOW Core yet. Be the first to rate this product.