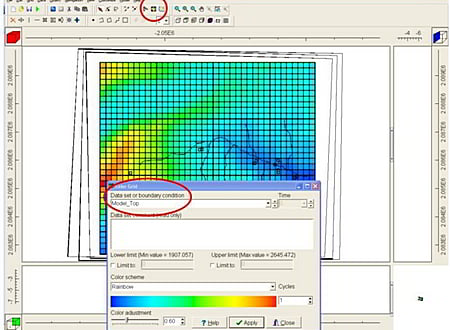 ModelMuse is a graphical user interface (GUI) for the U.S. Geological Survey (USGS) models MODFLOW–2005 and PHAST. This software package provides a GUI for creating the flow and transport input file for PHAST and the input files for MODFLOW–2005. In ModelMuse, the spatial data for the model is independent of the grid, and the temporal data is independent of the stress periods. Being able to input these data independently allows the user to redefine the spatial and temporal discretization at will. This report describes the basic concepts required to work with ModelMuse. These basic concepts include the model grid, data sets, formulas, objects, the method used to assign values to data sets, and model features.

An Unstructured Grid Version of MODFLOW

Argus ONE is a family of general purpose graphical Pre- and Post-Processors for the numerical modeler.

Steady and Nonsteady Flow in an Irregularly Shaped Flow System

MODFLOW-2005 (Harbaugh, 2005) simulates steady and nonsteady flow in an irregularly shaped flow system in which aquifer layers can be confined, unconfined, or a combination of confined and unconfined.

No one has rated ModelMuse yet. Be the first to rate this product.

Groundwater Vistas is a state of the art software package for 3D groundwater flow and contaminant transport modeling, calibration and optimization using the MODFLOW suite of codes.

The GeoWell Editor is a stand-alone editor that simplifies the production of GEO_WELL data files for submission to California’s GeoTracker system.

The Flood Damage Reduction Analysis (HEC-FDA) software provides the capability to perform an integrated hydrologic engineering and economic analysis during the formulation and evaluation of flood risk management plans.

The Regime Prescription Tool (HEC-RPT) is designed to facilitate entry, viewing, and documentation of flow recommendations in real-time, public settings.