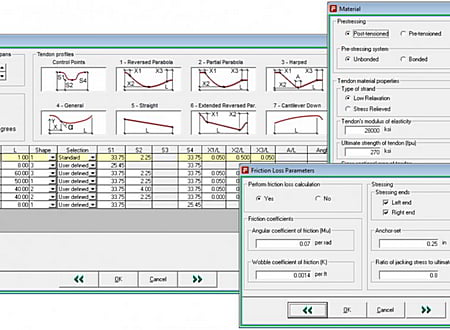 ADAPT-FELT is written to handle two essentially independent sources of stress loss in prestressed tendons, namely the long-term and immediate losses. The long-term stress losses considered are those due to the elastic shortening, creep and shrinkage of concrete, and stress relaxation in prestressing steel. The immediate losses are due to friction and anchoring of tendons.

The output of the program consists of reflection of input data, a listing of the long-term stress loss constituents and their sum, and the distribution of stress immediately before and after tensioning and seating of tendons, location and magnitude of maximum stress, elongations of the tendon at jacking locations, a graphical summary of the analysis, including tendon stresses along the length, tendon profile and other data.

Friction losses are due to length of tendon and angular changes in its geometry. A continuous tendon of a complex geometry must be subdivided into spans, or segments each having a geometry definable through the tendon profile library of ADAPT-FELT. Alternatively, a tendon may be defined by an adequate number of coordinates along its path.

The current library of tendon profiles of ADAPT-FELT consists of six most commonly used tendon geometries each for supported spans and cantilevers. In addition, a general shape tendon profile is supplied to approximate unusual shapes, such as tendons occupying a three dimensional space, or circular water tanks. Internally, the program calculates the stresses at 21 points along the length of each tendon profile listed in its library. Each tendon profile from the library typicallyrepresents a span of the structure. Only the computation outcome for three points is listed in the summary output of results. For the general tendon, the stresses at tendon ends and its mid-length are calculated and printed out. The change of angle between the ends and the mid-length is assumed to be one half of the total angle change specified by the user.

RISAFloor is a powerful application designed to help you create CAD drawings for structural engineers.

RISA-3D is an accurate tool for creating 3D models of buildings and other beam structures.

ADAPT-FELT has been rated 5.0 out of 5 points. A total of 1 votes cast and 0 users reviewed the software.