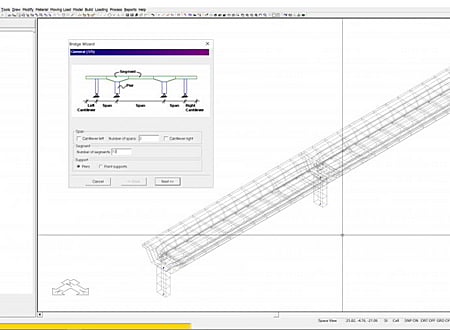 ADAPT-ABI is a general finite element program which performs 4D time-dependent analysis of concrete bridges and frames during and after the construction phase. ABI can investigate the effect of newly placed concrete, creep, shrinkage, and relaxation in prestressing over time, aging of concrete, and variation in temperature. Its excellent graphical interface can display moments, shears, stresses, and deformations for various stages of construction. The software can handle nonprestressed concrete, precast, cast-in-place, pre-tensioned or post-tensioned frames. The software is intended for incrementally constructed bridges and frames; retrofit of concrete frames where new concrete is added, new members are added or existing members are modified; and demolition (reverse construction) of frames. Other applications include composite construction and cable-stay structures. The basic module of the software (ADAPT-ABI Basic) is self-contained and complete. Other modules enhance the capabilities of the basic program.

This spreadsheet performs preliminary analysis of a precast prestressed bridge girder at the prestress transfer and service stages.

RISA-3D is an accurate tool for creating 3D models of buildings and other beam structures.

ADAPT-ABI has been rated 3.0 out of 5 points. A total of 1 votes cast and 1 users reviewed the software.