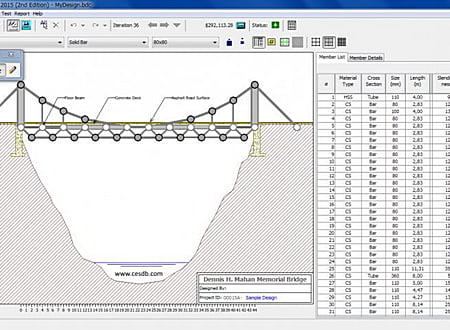 The West Point Bridge Design Contest is a nationwide Internet-based competition intended to promote math, science, and technology education in U.S. middle schools and high schools. The contest provides students with a realistic introduction to engineering through an engaging, hands-on design experience.

Your objective is to create an optimal bridge design. An optimal design is one that satisfies all of the design specifications, passes a simulated load test, and costs as little as possible.

When you use the West Point Bridge Designer, you will experience the engineering design process in simplified form. You will design a highway bridge in much the same way that practicing civil engineers design real highway bridges.

The West Point Bridge Designer gives you complete flexibility to create designs using any shape or configuration you want. Creating the design is fast and easy, so you can experiment with many different alternative configurations as you work toward the best possible solution. The process you will use is quite similar to the process used by practicing civil engineers as they design real structures. Indeed, the West Point Bridge Designer itself is quite similar to the computer-aided design (CAD) software used by practicing engineers, and it will help you in the same way that CAD software helps them--by taking care of the heavy-duty mathematical calculations, so that you can concentrate on the creative part of the design process.

WPBD 2016 is available in two formats:

This is the only version of the software that can be used for the 2016 Engineering Encounters Bridge Design Contest.

Disclaimer: This software was formerly known as the West Point Bridge Designer. It is now maintained and distributed by Engineering Encounters–a private, non-profit organization that is not affiliated with the U.S. government or the U.S. Military Academy at West Point.

GSA Bridge is easy-to-use bridge analysis software automatically sifts through the multiplicity of possible moving loads to find exactly which the crucial ones for your structure are.

STLBRIDGE is a continuous steel bridge analysis and design software package for use in the design of steel bridges conforming to AASHTO Standard Specifications for Highway Bridges or AASHTO Load and Resistance Factor Design Specifications.

CSiBridge design allows for quick and easy design and retrofitting of steel and concrete bridges.

Enjoying messing around with the program! It is brand new to me. In the past i have worked with programs similar, but this shall be new learning experience. The fact that it uses real life load capacities and all is pretty awesome.

In case anyone is interested, the authors of the Bridge Designer are now distributing the software at http://bridgedesigner.org/

When I install the program and try to open it, I get the following error message: "Cannot find the Intel ICD OpenGL Driver". Any suggestions?

Great program. Where can I get an error message interpreted?

My 8th grader used this in a science fair for a very interesting project, and later went to college for engineering and became not a civil, but a chemical engineer.

Thanks for hosting the install files here! I've used this software off and on for summer programs and such for almost a decade now. USMA Westpoint moved it to a nonProfit website a few years back and just this month that website went dark due to lack of funding. bridgecontest. org

I have download it to run in my system, let's see what happend

West point bridge designer. It is interesting. try it!

In school, students usually try building a bridge out of popsicle sticks and making blueprints. Your bridge building software is sophisticated yet easy to use. Stuff like this really teaches me more about bridges and is also fun!
A quick tip: The lower down your bridge is the more stable it usually is. You can also add a piller into the middle of it and use lots of triangle and dimonds. Most stable shapes.

West Point Bridge Designer has been rated 3.7 out of 5 points. A total of 697 votes cast and 9 users reviewed the software.