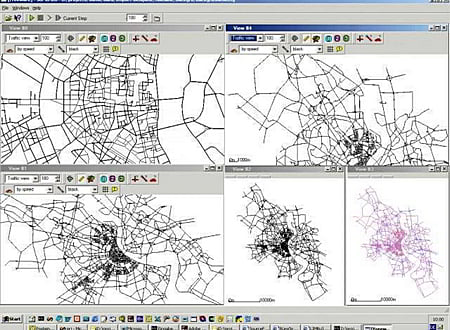 Simulation of Urban MObility, or "SUMO" for short, is an open source, microscopic, multi-modal traffic simulation. It allows to simulate how a given traffic demand which consists of single vehicles moves through a given road network. The simulation allows to address a large set of traffic management topics. It is purely microscopic: each vehicle is modelled explicitly, has an own route, and moves individually through the network.

SUMO has been used within several projects for answering a large variety of research questions:

Ground-breaking software for simulation and scientific visualisation. Through innovative use of interactive graphics, Sysquake reveals insights into complex mathematical systems.

The Reservoir System Simulation (HEC-ResSim) software is used to model reservoir operations at one or more reservoirs for a variety of operational goals and constraints.

Stand-alone program for numerical simulations of wind flows in the digital wind tunnel as well as for exporting the generated wind loads to RFEM and RSTAB.

PGSplice is our spliced girder analysis software. This software has been developed for the Alternate Route Project.

Submit a review about SUMO software with your social media profile

SUMO has been rated 4.0 out of 5 points. A total of 1 votes cast and 0 users reviewed the software.

PerRoad is a mechanistic-based procedure for the design of flexible long-life or perpetual pavement structures.

PaveXpress is a free web-based pavement design tool available for use by local agencies, engineers and architects who need a reliable way to quickly determine the necessary pavement thickness for a given section of roadway or project.

ITETripGen enables development of estimates of motor vehicle, pedestrian, transit user, bicyclist, and truck trips, generated by a land use based on its characteristics and setting.