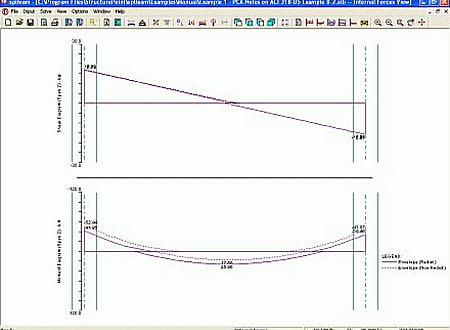 As a limited edition of spSlab, spBeam features torsion effects in the shear design and investigation allowing engineers to achieve more economical cross sections where coupled shear and torsion occur (in accordance with US and Canadian codes). Save more in both material and labor with the moment redistribution feature. It allows up to 20% reduction of negative moments over supports reducing reinforcement congestions in these areas.

Design and Investigation of Rectangular, Round and Irregular Concrete Columns

spColumn is widely used for design of shear walls, bridge piers as well as typical framing elements in buildings and structures.

This application can be used to make quick parameters calculations of beams and reinforced concrete slab not only in the office but also at the construction site.

spBeam has been rated 5.0 out of 5 points. A total of 1 votes cast and 0 users reviewed the software.

SFAT is a fatigue life analysis software for steel structures, components, as well as welded and bolted connections in bridges, cranes, offshore platforms, offshore wind structures, and other structures subjected to cyclic loading.

ABC: ArcelorMittal Beams Calculator is a free pre-design tool for use in designing a variety of steel and composite structures such as portal frames, beam and column structures, trusses, and column-beam connections.

This software designs composite floor slabs at elevated temperatures by taking into account the enhancing effects of the membrane action in slab.