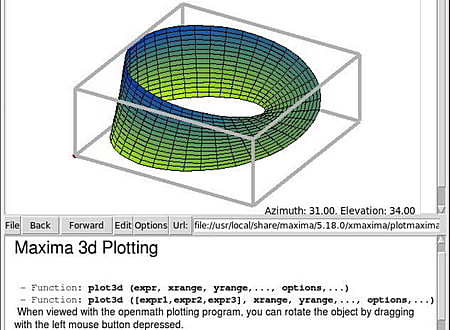 The Maxima source code can be compiled on many systems, including Windows, Linux, and MacOS X. The source code for all systems and precompiled binaries for Windows and Linux are available at the SourceForge file manager.

Maxima is a descendant of Macsyma, the legendary computer algebra system developed in the late 1960s at the Massachusetts Institute of Technology. It is the only system based on that effort still publicly available and with an active user community, thanks to its open source nature. Macsyma was revolutionary in its day, and many later systems, such as Maple and Mathematica, were inspired by it.

The Maxima branch of Macsyma was maintained by William Schelter from 1982 until he passed away in 2001. In 1998 he obtained permission to release the source code under the GNU General Public License (GPL). It was his efforts and skill which have made the survival of Maxima possible, and we are very grateful to him for volunteering his time and expert knowledge to keep the original DOE Macsyma code alive and well. Since his passing a group of users and developers has formed to bring Maxima to a wider audience.

Submit a review about Maxima software with your social media profile

Maxima has been rated 5.0 out of 5 points. A total of 1 votes cast and 0 users reviewed the software.