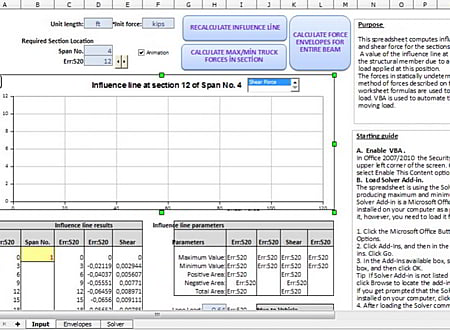 This spreadsheet computes influence lines of bending moment and shear force for the sections of continuous beams.

A value of the influence line at position 'X' presents a force in the structural member due to a concentrated downward unit load applied at this position.

The forces in statically undetermined structure are found using method of forces described on the page 'Solver'. The worksheet formulas are used to solve the structure for a single load. VBA is used to automate this task for various locations of moving load.

A.  Enable  VBA
In Office 2007/2010  the Security Warning will appear in the upper left corner of the screen. Click on Options, and then select Enable This Content option.
B.  Load Solver Add-in.
The spreadsheet is using the Solver to find truck locations producing maximum and minimum forces in the beam. The Solver Add-in is a Microsoft Office Excel add-in which is already installed on your computer as a part of Microsoft Office. To use it, however, you need to load it first.

Influence Line diagrams for bending moments at critical sections in a single or multi-span continuous beam.

Influence Lines has been rated 5.0 out of 5 points. A total of 1 votes cast and 0 users reviewed the software.