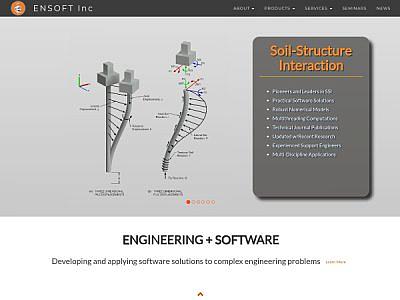 Analysis of the Axial Capacity of Driven Piles

APILE is used to compute the axial capacity, as a function of depth, of a driven pile in clay, sand, or mixed-soil profiles.

DYNAN can be used for the dynamic analysis under transient and random loading in the time domain.

Analysis of a Soil-Supported Mat or a Structural Slab

GROUP has been well accepted as an useful design tool for analyzing the behavior of piles in a group subjected to both axial and lateral loadings.

Analysis of Piles and Drilled Shafts Under Lateral Loads

LPILE is a special-purpose program based on rational procedures for analyzing a pile under lateral loading using the p-y method.

PYWALL considers soil-structure interaction by using a beam-column model and can analyze the behavior of a flexible retaining wall or soldier-pile wall with or without tiebacks or bracing systems.

SHAFT is a computer program used to evaluate the axial capacity and the short-term, load-settlement curves of drilled shafts or bored piles in various types of soils.

STABLPRO has been developed specifically for users to ease their modeling process and to enhance the graphical observation of slope boundaries and critical slip surfaces.

TZPILE implements the well-known method of soil-structure interaction, commonly called the t-z method, where t-z and Q-w curves are used respectively for load transfers in side resistance and end bearing.