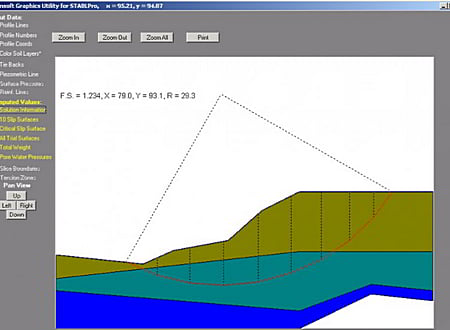 STABL is a computer program written for the general solution of slope-stability problems using a two-dimensional limiting equilibrium method. The original program was developed by Ronald A. Siegel at Purdue University in 1975. STABL was placed on line for routine use in 1976 by the Indiana Department of Highways, and after being reported in the open literature, the program was adopted by many agencies.

The extensive use of STABL for academic purposes originated requests from users to introduce many improvements to the original STABL program since its introduction. Most of the current versions can handle tieback loading, reinforced-earth layers in embankment, and Spencer's method of analysis.

The computer program STABLPRO has been developed specifically for users to ease their modeling process and to enhance the graphical observation of slope boundaries and critical slip surfaces.

LEMSlope is a slope stability analysis program using traditional limit equilibrium method. It takes advantage of the strength of Python script language and sets up the analysis model parametrically.

Submit a review about StablPro software with your social media profile

StablPro has been rated 3.3 out of 5 points. A total of 6 votes cast and 2 users reviewed the software.