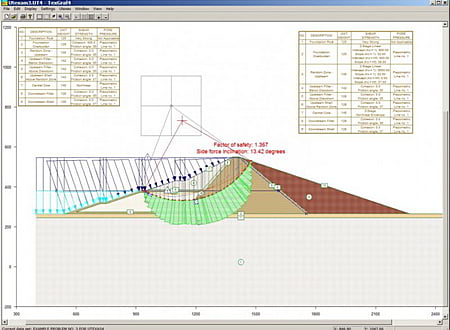 UTexas4 is a computer software application for computing the stability of earth and earth-rock slopes and embankments. UTEXAS4 has been written and is maintained by Dr. Stephen G. Wright of Shinoak Software, who is well-recognized as one of the leading experts in solving problems in soil strength and slope stability (Duncan and Wright, 2005).

UTexas4 has been considered one of the most sophisticated commercial software available to study the stability of slopes using a two-dimensional, limit-equilibrium method. The program has been widely used by the US Army Corps of Engineers and US Federal Highway Administration.

STABLPRO has been developed specifically for users to ease their modeling process and to enhance the graphical observation of slope boundaries and critical slip surfaces.

RISASection allows the user to define any type of complex cross section either by combining standard shapes or by defining new shapes.

Pipe Flow Expert is designed to help todays engineers analyze and solve a wide range of problems where the flow and pressure loss throughout a pipe network must be determined.

Submit a review about UTEXAS software with your social media profile

UTEXAS has been rated 2.3 out of 5 points. A total of 3 votes cast and 0 users reviewed the software.

LEMSlope is a slope stability analysis program using traditional limit equilibrium method. It takes advantage of the strength of Python script language and sets up the analysis model parametrically.