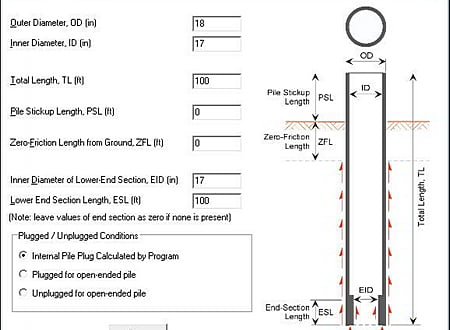 APILE is used to compute the axial capacity, as a function of depth, of a driven pile in clay, sand, or mixed-soil profiles. Several methods are used by APILE for computations of pile capacity: i) American Petroleum Institute (API RP-2A), ii) U.S. Army Corps of Engineers (USACE), iii) U.S. Federal Highway Administration (FHWA), and the iv) revised Lambda method.

The APILE program also provides a flexibility allowing users to specify any set of values for load transfer in side resistance and end bearing as a function of depth. This feature is useful for cases when site data is available from instrumented axial load tests.

APILE allows the implementation of new LRFD analyses (AASHTO LRFD Specifications) so users may enter independent reduction factors (resistance factors) for skin friction and end bearing on each soil layer in the model. This new feature may also be useful to implement strength reductions during pile driving, or for overall pile-group reduction factor.

* APILE download link provides demo version of the software for Regular and Offshore.

The FB-Deep computer program is a Windows based program used to estimate the static axial capacity of drilled shafts and driven piles.

Analysis of Piles and Drilled Shafts Under Lateral Loads

LPILE is a special-purpose program based on rational procedures for analyzing a pile under lateral loading using the p-y method.

PileAXL is a program that analyzes the behaviour of single piles under axial loading applied at the pile head for both onshore and offshore engineering problems.

SHAFT is a computer program used to evaluate the axial capacity and the short-term, load-settlement curves of drilled shafts or bored piles in various types of soils.

Submit a review about APILE software with your social media profile

APILE has been rated 5.0 out of 5 points. A total of 2 votes cast and 0 users reviewed the software.