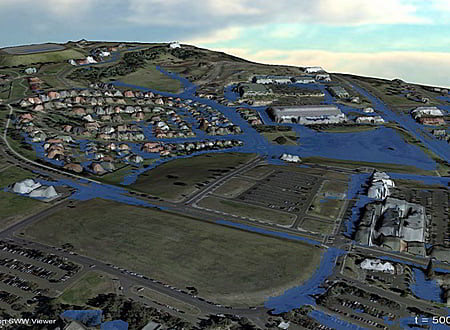 ANUGA Hydro is a free and open source software tool for hydrodynamic modelling, suitable for predicting the consequences of hydrological disasters such as riverine flooding, storm surges and tsunamis. For example, ANUGA can be used to create predicted inundation maps based on hypothetical tsunami or flood scenarios. The ANUGA name without qualification is used informally to mean the ANUGA Hydro tool.

ANUGA was created in a collaboration by Geoscience Australia and Mathematical Sciences Institute at the Australian National University, though now it is further developed and maintained by a community of volunteers.

ANUGA is a python 3 package with some C and Cython extensions (and an optional fortran extension). Software written in Python can be produced quickly and can be readily adapted to changing requirements throughout its lifetime. Computationally intensive components are written for efficiency in C routines working directly with Python numpy structures.

Modelling the effects on the built environment of natural hazards such as riverine flooding, storm surges and tsunami is critical for understanding their economic and social impact on our urban communities. Geoscience Australia and the Australian National University have developed a freely available hydrodynamic inundation modelling tool called ANUGA to help simulate the impact of these hazards. Based on research conducted at the Australian National University in the nineties, the development of ANUGA was commenced at Geoscience Australia in 2004. Although the initial aim of ANUGA was a capability to model inundation from storm surge events, the focus was redirected to tsunami inundation in the wake of the 2004 Indian Ocean earthquake and tsunami. The first public open source release of ANUGA took place in December 2006. In 2007 after approaches from Local Government Engineers, a rainfall routine was added. This allows rainfall to be placed directly over the topography described in the computational domain. A time series can be applied to a polygon, or a series of polygons. Alternatively a rainfall grid can be applied. This is particularly useful for applying RADAR rainfall. ANUGA can model culverts and bridges with code from the open source Watershed Bounded Network Model (WBNM){Boyd, Rigby, VanDrie}, having a pipe, box and trapezoid routine. Development continues to create an arbitrary shape culvert solver and linking to a 1D piped network model such as SWMM. ANUGA is stable even in extreme flow with high Froude numbers. An example of this is the 1928 St Francis Dam Break in California that resulted in extreme flow velocities and complex waves in a tortuous valley. ANUGA ran this model with full volumetric mass balance preserved at all times and no instabilities anywhere in the model.

The fluid dynamics in ANUGA are based on a Finite volume method for solving the Shallow Water Wave Equation. The study area is represented by a mesh of triangular cells that can vary in size in order to capture detail where it is required. By solving the governing equation within each cell, water surface, bed elevation (hence depth) and horizontal (X-y) momentum are tracked over time.

A major capability of ANUGA is that it can model the process of wetting and drying as water enters and leaves an area. This means that it is suitable for simulating water flow onto a beach or dry land and around structures such as buildings. ANUGA is also capable of modelling hydraulic jumps due to the ability of the finite-volume method to accommodate discontinuities in the solution. While ANUGA works with discontinuities in the conserved momentum quantities, only the discontinuous elevation solvers allow discontinuities in the bed elevation. The latter were added to the code in 2013 and include the default algorithm as of ANUGA 2.0.

RiverFLO-2D is a hydrodynamic and mobile bed finite element model for rivers that provides high resolution flood hydraulics accounting for supercritical and subcritical regimes over dry or wet river beds.

Calculation and Design of Hydraulic Works and Installations

Tsipiras HydroTools is a set of tools useful for calculation and design of hydraulic works and installations.

ANUGA Hydro has been rated 5.0 out of 5 points. A total of 1 votes cast and 0 users reviewed the software.

This software is a complete hydrology package included as a number of separate executable files.

Tsipiras HydroTools is a set of tools useful for calculation and design of hydraulic works and installations.

CSiPlant is an integrated engineering software product for analysis and design of piping systems and frame structures, .