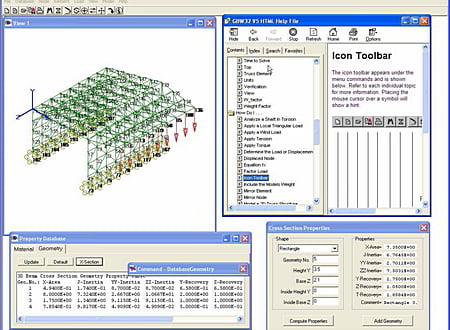 GBW32 V5. 0 is a 3D Finite Element program that uses truss and beam elements to model a wide range of Mechanical and Civil structures.

The graphical user interface is powerful and easy to use to quickly model a structure, apply loads and constraints, and analyze the model. GBW32 supports release nodes for all loadings, batch analysis, auto analysis, has an undo/redo feature and a built in property section calculator. Displacements, loads, stress information and animation are available to determine the effect of the applied loading and constraints.

Results can be viewed with a few mouse clicks. Models can be imported/exported as a DXF file. Model, material and geometry files are ASCII text and can be created/edited within the program or from another source.

Loads available include global loads and moments at nodes, global uniform loads, acceleration and angular velocity. Local element loads include trapezoidal loads, axial, torsion, moment and thermal loads. Constraints or springs to ground can be applied in all 6 degrees of freedom. Models can be created within the graphical environment or imported as a DXF file.

* Grape GBW32 download link provides free for non-commercial use version of the software.

Easy to use 3D truss analyzer using finite element methods. It has an easy graphical interface where you can define, loads, nodes and elements.

Thickness Plot is created to display plate elements thicknesses for flat elements selections like frames, decks and longitudinals in Femap.

Aimed at solution of complex solids with realistic and advanced boundary condition simulations using either the integrated solver or a choice of several other well known solvers which can be run seamlessly within the program environment.

Grape GBW32 has been rated 3.7 out of 5 points. A total of 3 votes cast and 0 users reviewed the software.