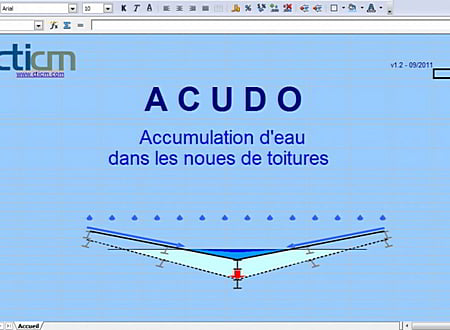 The phenomenon of water accumulation on small low slope roofs (? 5%) is one of the causes of accidents among the most recurrent. This usually occurs on low-slope roofs in case of rain or flooding evacuations. Under the water load, the beams supporting the cover are deformed and a pocket occurs. The water charge accumulates and thus creates more distortion, which in turn increases the accumulation of water, etc. For roofs "flexible", a collapse can occur if the water discharge is slower than accumulation. The importance of this phenomenon and its effects is emphasized but not or poorly treated in the French rules and Eurocodes.

To help the practitioner to understand this phenomenon better control their consequences and to take the necessary arrangements, ACUDO application is free to download. This application allows taking into account the effect of water accumulation phenomenon in a building roof tied by determining, through an iterative process, the final state of the system studied.

This application is an evolution of the one that was used as part of a study published in the journal Steel Construction No. 1- 2010 (CTICM): "Effect of water accumulation in the horizontal valleys of pitched roofs symmetrical gently sloping "(TM. Nguyen, Y. Galéa Mr. Lukic).

The studied system is subjected to a load that results from a combination of shares (usually at Ultimate Limit State). The resulting load is characterized by a uniform surface charge and distributed throughout the roof slope (dead loads, snow, ...), a surface load distributed over a rectangular area (snow accumulation, maintenance, ...) and, of course, an initial charge of water, defined by the maximum height above the undeformed assumed roof (level of the overflow or the roof edge, the stationary level in view of the discharge flow rate of the water pipes ...).

Buildings LCA is a simplified tool that let mobile/tablet users in Android/Apple devices to have an easy-friendly lifecycle calculation.

The A3C software allows the designer to perform the detailed verification of a single steel member or a composite steel-concrete column according to the rules of the Eurocodes.

Membrane Actions of Composite Structures in Case of Fire

This software designs composite floor slabs at elevated temperatures by taking into account the enhancing effects of the membrane action in slab.

Predesign of Portal Frames According to Eurocode 3

PORTAL is a software to be used for the pre-design of single bay steel portal frames according to ENV and ENV 1993-1-1 for resistance checks.

Submit a review about ACUDO software with your social media profile

ACUDO has been rated 2.5 out of 5 points. A total of 2 votes cast and 0 users reviewed the software.