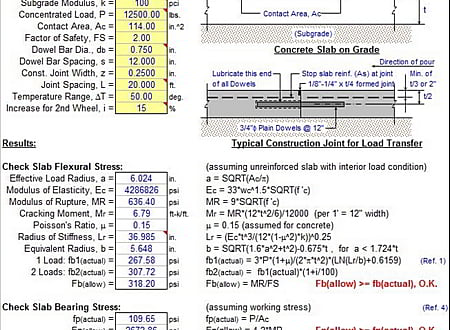 GRDSLAB is a spreadsheet program written in MS-Excel for the purpose of analysis of concrete slabs on grade. Specifically, a concrete slab on grade may be subjected to concentrated post or wheel loading. Then for the given parameters, the slab flexural, bearing, and shear stresses are checked, the estimated crack width is determined, the minimum required distribution reinforcing is determined, and the bearing stress on the dowels at construction joints is checked. Also, design charts from the Portland Cement Association (PCA) are included to provide an additional method for determining/checking required slab thickness for flexure. The ability to analyze the capacity of a slab on grade subjected to continuous wall (line-type) load as well as stationary, uniformly distributed live loads is also provided.

1. This program is based on the following references:

2. The "Slab on Grade" worksheet assumes a structurally unreinforced slab, ACI-360"Type B", reinforced only for shrinkage and temperature.An interior load condition is assumed for flexural analysis.That is, the concentrated post or wheel load is assumed to be well away from a "free" slab edge or corner.The original theory and equations by H.M. Westergaard (1926) as modified by Reference (a) in item #1 above are used forthe flexual stress analysis.Some of the more significant simplifying assumptions made in the Westergaard analysis model are as follows:

3. Other basic assumptions used in the flexural analysis of the "Slab on Grade" worksheet are as follows:

4. The "Slab on Grade" worksheet allows the user to account for the effect of an additional post or wheel load. The increase in stress, 'i', due to a 2nd wheel (or post) load expressed as a percentage of stress for a single wheel (or post) load and is to be input by the user.Refer to the input comment box for recommendations.

6. In the four (4) worksheets pertaining to the PCA Figures 3, 7a, 7b, and 7c, the user must manually determine (read) the required slab thickness from the design chart and must manually input that thickness in the appropriate cell at the bottom of the page.An interation or two may be required, as when the slab thickness is input, it may/may not change the effective contact area.Note:the user may unprotect the worksheet (no password is required) and access the Drawing Toolbar (select: View, Toolbars, and Drawing) to manually draw in (superimpose) the lines on the chart which are used to determine the required slab thickness.

7.This program contains numerous “comment boxes” which contain a wide variety of information including explanations of input or output items, equations used, data tables, etc.(Note:presence of a “comment box” is denoted by a “red triangle” in the upper right-hand corner of a cell.Merely move the mouse pointer to the desired cell to view the contents of that particular "comment box".)

Slab on metal deck analysis and design (both composite and form deck) per SDI and ACI 318-99.

BOEF is a spreadsheet program written in MS-Excel for the purpose of analysis a finite length beam with free ends supported continuously on an elastic foundation.

FOOTINGS is a spreadsheet program written in MS-Excel for the purpose of analysis of rigid rectangular spread footings with up to 8 total piers, and for either uniaxial or biaxial resultant eccentricities.

Submit a review about GRDSLAB software with your social media profile

GRDSLAB has been rated 3.8 out of 5 points. A total of 17 votes cast and 2 users reviewed the software.