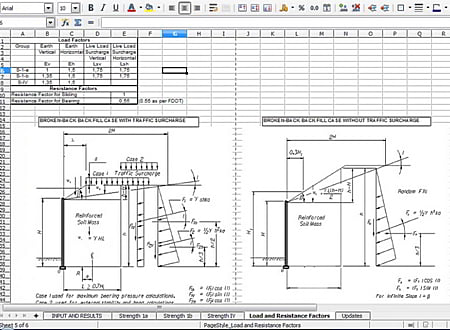 Mechanically stabilized earth (MSE) walls, also called reinforced soil walls, are commonly used structures for retaining the earth under bridges, highways, railroads, water front ports, and various other types of infrastructure. These walls are constructed from the bottom up by placing alternating layers of soil and reinforcement. The reinforcement could be a relatively extensible product such as a geogrid or geotextile or a more rigid product such as steel ribbed strips. The reinforced soil is usually engineered granular material and the facing of these walls is typically inclined at greater than 70 degrees.

The program Redi Rock wall is used to design and check a retaining walls made from blocks produced by Redi-Rock, Inc (USA).

CPillar is a quick, interactive, and easy-to-use analysis tool for evaluating the stability of surface or underground crown pillars, and laminated roof beds.

MSE Wall has been rated 5.0 out of 5 points. A total of 2 votes cast and 0 users reviewed the software.